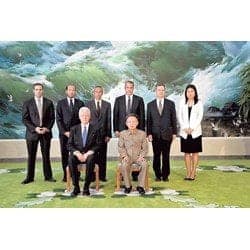 An example of every day Totalitarian Kitsch

This worldâ€™s eyes were on this photograph of former President Bill Clinton seated next to North Korean dictator Kim Jong Il. This official picture was taken at the end of talks that eventually led to the freeing of two imprisoned American journalists. While this is an impressive photo, what caught my attention the most was the photoâ€™s amazing backdrop. This is a huge mural filled with lurid greens, crashing seas, flying sea birds, and brilliant whites.

While it seemed like an everyday â€œdo not offendâ€ type mural, there was something about it that kept me thinking about it and I had to keep coming back and looking at it. One of the things I noticed after giving this some thought was that waves, larger than the dignitaries, appeared ready to drop on them and drown all of the dignitaries.

After a while, I also noticed the opposing forces of nature at work in this mural. The luminance of the green, combined with the fluttering birds versus the anger and violence of the heaving and crashing seas. As strange as it seemed, it appeared to me that the mural was depicting various elements at war with each other. After this thought I started looking closer and saw waves leading from left to right until you get to the bottom right hand corner where flock of birds seem to reverse the momentum.

After careful thought of everything I saw in the mural, I came to the conclusion that this was no mistake and was intentionally created as a piece of propaganda. This fact makes it belong to the group known as totalitarian kitsch. Totalitarian kitsch has single purpose, to bolster a dictatorial regime and glorify its leader.
What is the message of the mural? Given the fact that it is located in what appears to be the presidential palace, it is a simple one: Kim Jong Ilâ€™s regime is a force of nature.

The mural conveys two distinct messages: Birds and soft lighting lend thoughts of a natural paradise, which a lot of regimes believe they are creating for their subjects. The crashing waves represent the overwhelming power of the regime, ready to crush all enemies.

â€œKitschâ€ has come to represent anything over-the-top or tacky in the our current culture. However, in art, itâ€™s meaning is more specific. Quite simply put, it refers to works trafficking in facile, base or false emotionsâ€”most often sentimentalityâ€”and whose imagery is off-the-shelf and formulaic, a debased version of a once-original aesthetic idea. Not quite so simply put right? To simplify, a need to conjure that warm and fuzzy feeling? You have seen the fiery sunset. Renderings attempting to express a fragile innocence or what about the portraits of the shoeless urchin carrying the bird with the broken wing? These are all forms of Kitsch and Totalitarian kitsch plays on these emotions and base human needs to create an indelible bond between the viewer and the regime.

When you think about how these regimes often enforce their leaders will upon their subjects, you canâ€™t help but wonder what kind of artists would come out of the countries should they not be held under such a regime. Is it a fact that the artistic abilities would increase? No, how could that possibly be the case. There are a myriad of examples where artists thrived under the worst of conditions. In fact, many people think artists are often at their best in the worst of times. I think that should these artists be given the chance to see what the rest of the world offers, they could definitely benefit from it but I do not believe it would change their artistic talent. It would simply give them a larger canvas from which to draw from.

There are many examples of this art form throughout the world and throughout time. This form of art has been used since man began. Some say even the cave man paintings contained hints of this. Is it abuse of power? Probably not any more than a capitalist stating that their product is better than their competitors. It becomes an abuse of power when the people are forced to produce these art works against their will and beliefs.