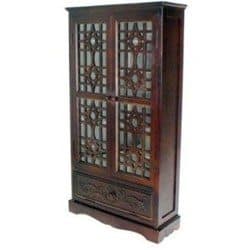 Gothic Furniture has become popular in recent years, possibly due in part to the influence of Gothic fantasy novels, television and cinema. Today’s Gothic style is less severe and uncompromising than its predecessors; delicate ironwork and simplicity replace the heavy dark oak and walnut pieces of the past.

Gothic Furniture became popular in the 19th century as the Victorians abandoned the neo-classical roman and greek forms beloved of the Georgian period and embraced the designs based on European architecture of the 12th to 15th Centuries. Gothic Revival, as it became known, is a style sober, substantial, often heavy, and characterized by vertical points or spires. It is often carved with plant forms or religious representations. In its original Medieval form, it was simple and portable; wealthy nobles needed to take their furniture from place to place as they moved around the country, so furniture was easy to dismantle and reassemble; consisting mainly of wooden chests and bench tables. The Victorian revival included four-poster beds, huge sideboards, cabinets and tables, ornate coat and umbrella stands, although sofas and chairs were often lighter and more comfortable in style.

Creating a Gothic-style room will be easier if the room is already rather dark – but then, that’s probably why you thought of it! Dark wallpaper or wallpaper with bare trees is a good start – or for that extra touch, a mural! Imitation stone wallcoverings give a nice touch, but limit it to one wall or it might feel like a dungeon – unless that’s what you had in mind! Dark purple, dark red and dark blue are suitable colors to use. Curtains should be dark velvet, preferably down to the floor. During the day, they can be held back with large cords in silver or gold. Decorative door panels can hide modern doors. For lighting, a chandelier with candles is ideal, as are candle wall sconces. Furniture should be solid and heavy looking, with characteristic pointed arches or spires, and carved with designs or figures. Chairs and couches can be cushioned or plain. Wallcoverings can include tapestries denoting battles, or crossed battle axes, and If you have a suit of armor, that will do nicely!