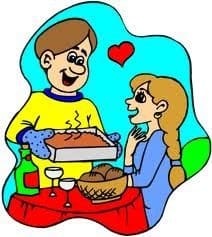 Sunday morning, not like any other Sunday morning, cause Ian knew that Gin was upset, but was Ian going to apologize or explain what had happened. No!. Instead he was going to act like nothing happened. While Gin was on the phone with her family, she heard the door close. After she got off the phone, she looked out the window to see the car gone, Ian had took the car and left. So Gin called him on his cell to find out where he was going, he said “To the store to get that cheesecake I promised you, is there anything least you would like me to pick up?”
Ian must have though getting Gin some cheesecake, that she actually was craving yesterday was going to make her forget everything. Ian must have known that he was wrong cause he even offered to cook dinner.
It’s around lunch time now and Ian makes some tea, Gin and him sit at the dining table and have an afternoon tea and a chat about life. Gin still disappointed that Ian still hadn’t apologize, she decided to just forgive him and make the best of the day.
When it was time for dinner Gin put her famous baked potatoes in the oven, that when Ian came downstairs ready to cook, he only had to make his famous steaks. After a delicious dinner, which everyone actually sat at the dinner table which usually don’t happen often. It was nice!.The rest of the evening was quiet, Gin cuddle with her hubby and watched her inspirational shows, while hubby surf the net on his ipad, learning something new.
Gin may have thought that it will be smooth sailing now, everything can go back to normal. The questions are “Did it?” and “What is normal?”