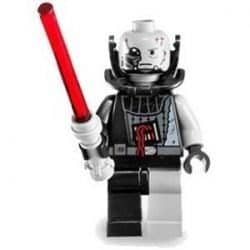 There has never been a bad guy more universally loved than Darth Vader. Everyone knows that he is evil yet we all wished he would turn away from the dark side of the force.

As such, LEGO Darth Vader minifigures remain right at the top when it comes to collectibility. Not all that long ago, you had to buy the entire LEGO set if you wanted a specific Star Wars minifig. Fortunately, the internet has changed all that.

You can now buy individual Star Wars LEGO minifigures without shelling out hundreds of dollars for the entire set.
With that being said, here are a few of my personal favorite LEGO Darth Vader figures.

Early in 2005, LEGO introduced lightsabers that actually light up.
These rare Star Wars LEGO variants are extremely collectible and are becoming increasingly difficult to find.
The first time a light up lightsaber was available for Darth Vader was in LEGO set 72631; Tie Fighter. What’s more, this cool set featured the original Darth Vader torso and ominous dark cape!

If you are looking to buy the battle damaged Darth Vader LEGO featured above, the only place you can find it is in the LEGO Star Wars Rogue Shadow play set.

This set is absolutely massive. At 482 pieces, it certainly should take you a few hours to put it all together.

What I really like about this set is the fact that it includes not only Galen Mareks, but also a version of Darth Vader where we can actually see the damage inflicted by Jedi Master Obi Wan Kenobi.

Featured Item: Star Wars LEGO: The Empire Strikes Out
All of our favorite Star Wars characters are back once again to try and save the galaxy from the evil Empire.
Luke SKywalker, Han Solo, and everyone’s favorite princess, Leia have thought there victory would allow for some downtime. Unfortunately, a new threat has arisen to take the place of the Empire.
If you, or your kids, are a fan of either Star Wars OR LEGO, you are sure to love The Empire Strikes Out.