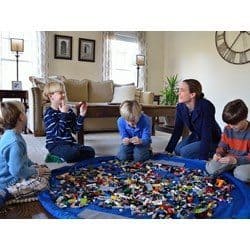 Lego refers to some colorfully created plastic bricks, which interlock to make different various objects. They are mostly used in play by children to create toy vehicles and buildings. They come with an array of mini-figures and gears, which make the interlocking easier to manipulate, assemble and dissemble. Legos are manufactured for a specific purpose which extends to games, amusement parks and movies, with young children in mind.

The term Lego is derived from a Danish word and it closely translates ‘play well.’

Looking For A Fun Way To Educate Your Child?

It is as such clear that Lego bricks keep children well interested in the activities they get involved in. For children who find it hard to concentrate in their studies, using Lego’s to solve math problems, for example, is one way to hold their interest. Lego’s have a way of developing spatial skills, in that they require one to reason in order to come up with the intended outcome. While using the bricks, a child is also in a position to enhance their addition and subtraction abilities and skills.

Some of the simple strategies which can be applied while using Lego’s to solve math problems include sorting the blocks out in terms of pieces that are of the same color and size. Sorting skills are an integral part of the math curriculum at the kindergarten level. Once the sorting out has been done, piles are made and the children’s task is to make comparisons of the piles in terms of their sizes, then arrange them in ascending or descending order.

While creating bricks and other structures with the pieces of Lego’s, a child is able to enhance the ability to think in three dimensions and make calculations, hence enhancing their problem-solving skills. For example, a teacher or a child’s guide can create a structure and have a child mimic or copy the structure and make an identical one. In so doing, the child has to pay attention to the number of pieces that have been used in creating the structure and this call for application of addition and subtraction skills.

Math problems can be transferred from flash cards to the Lego cubes. The math equation on the flash card is solved practically using the cubes. Using cubes of the same color, for example red, makes it even easier for the child to come up with a solution more easily.