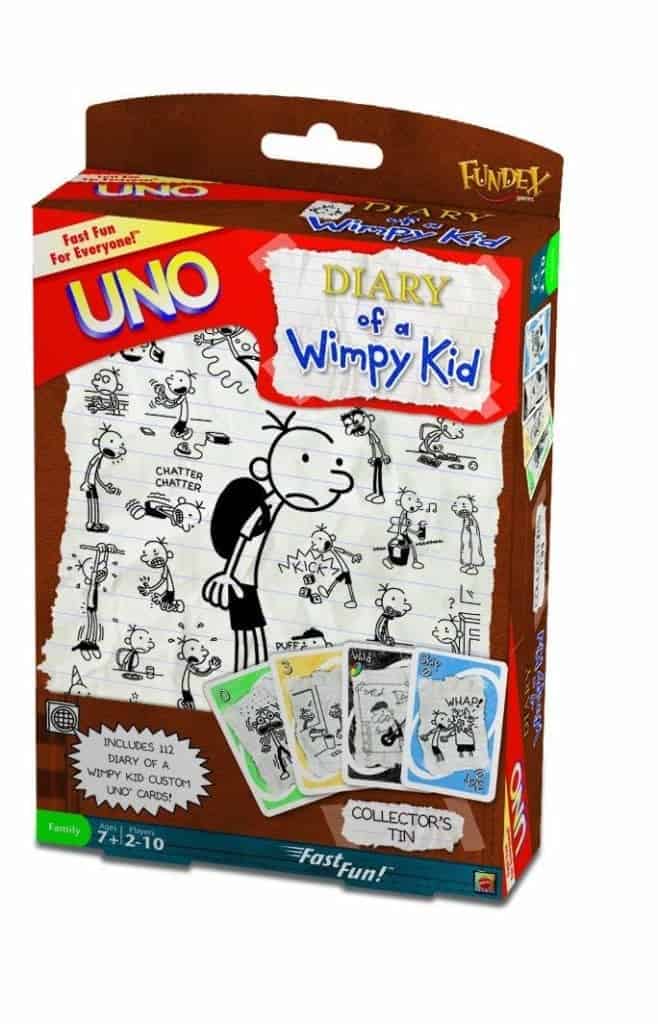 Is your kid a fan of the Diary of a Wimpy Kid series? If so, then you have plenty of options when it comes to what gift to purchase. The man behind this hit series is Jeff Kinney. He had very humble expectations for his work when he first released it online on Funbrain.com back in 2004. But more than a decade later and millions of copies sold worldwide, Jeff now finds himself a recipient of numerous awards, including being named one of Time magazineâ€™s most influential people.

The series consists of 10 books. The online version continues to amass staggering numbers, with over 70,000 daily views. To date, it has been viewed by more than 20 million unique users. The massive success of the Diary of a Wimpy Kid has turned it into one enormous franchise. There have been multiple movie adaptations, all of which have been well received internationally. Several games for kids have also been created featuring Greg Heffley and the rest of the squad.

The Diary of a Wimpy Kid Uno Cards is one example of a game which has gained the license of the famous franchise. This is surely good news if your kid loves both the Diary of a Wimpy Kid series and the Uno card game. It makes for an excellent gift for the holidays, your kidâ€™s birthday, or pretty much any occasion. It has garnered a lot of positive reviews online, with plenty of parents sharing their kidsâ€™ experience with the Uno cards.

The Uno card game is a timeless classic. Invented by Merle Robbins in 1971, it continues to be popular today particularly among the younger population. Parents tend to worry when their kids play card games, but the Uno card game is perfectly fine for children. And when your little one sees the characters of the Diary of a Wimpy Kid on the cards, his or her eyes will surely light up!

When you buy this package, you get to enjoy the classic Uno game. The 108 cards are housed in a tin storage, which is much better than a plastic or cardboard box as you can more readily take out the cards and put them back in. Every single card has the Diary of a Wimpy Kid theme, so your kid always has something to look forward to.

It is also important to note that the cards are made from safe and high quality materials. They are also relatively larger than regular playing cards, but kids shouldnâ€™t have a problem holding them. Itâ€™s a game for all age groups, but ideally, your kid should be at least 5 years of age as the game has quite a bit of a learning curve which toddlers might find too difficult. The game can be played by 2 to 10 players, so invite the whole family and join in on the fun!

The Diary of a Wimpy Kid Uno Cards will surely put a smile across the face of your kid. Itâ€™s a great way to remind your child about all the characters in the story, while also offering you the opportunity to spend some fun time with your kid.

Find them on Amazon