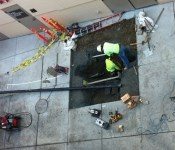 A lot of times, okay, most of the time people give absolutely no thought to their sewer lines.  Understandable, they aren’t something that malfunctions very often.  But when they do, the end result is something like the video below, at least that’s the potential.  If you’re not wanting to see such a thing happen to your sewer lines, how do you go about preventing it?
There’s an easy solution to preventing this from happening, and that’s having them inspected.  It’s not hard, and is relatively inexpensive.  If you’re a Realtor, then depending on whom you’re doing business with, you can probably get the inspection for a discounted rate.  Even if you’re not a Realtor, the prices aren’t that preposterous and they’re definitely nothing like the end result should you not get the inspection done.
For your consideration, is the following Sirgo!
Sewer lines
can be a big problem, and not just because of the smell!

When you’re looking at having to replace a sewer line, you’re looking at an average cost of 2,000 all the way up to the 20,000 in repair.  That’s not what you want if you are able to avoid it. So, how do you avoid damage, destruction and repair going up that high?  Bring in a company that can inspect your sewer lines a head of time.  It’s not hard, and it’s not costly, it just takes you wanting to do a little bit of preventative maintenance, as opposed to waiting until it’s to late.
If you bring in a reputable sewer line specialist, such as US Trenchless, then you’re not going to have to worry about what they can and can’t do.  That’s perhaps the hardest thing to come by, a company that’s not going to take you for a ride, as well as know what in the world they’re doing.
One of the things I’ve found with a reputable company, is that they will show you with a camera, what’s going on. They won’t have a problem with you watch what they’re doing, to make sure that what they’re doing is above board.  I always look at it as a learning experiences and ask a ton of questions.  If you’re not able to do so, it never hurts to get references from your friends and family.
One of two things will happen when you’re sewer lines are inspected: they’re fine and everything’s a go, or they’re not and they need some attention.   The first makes you happy, then second should as well.  If you’re sitting there wondering how that can be, consider that you found the problem before it was a problem, and that makes it priceless!
It may not seem like much...
but it can save you thousands, and is revolutionary!

Your sewers happy, and so are you!

It’s not hard for them to do, or really to time consuming, it’s a matter of how thick your broken pipes are, and how long it takes to hit the sewer systems.  The strip the old one out, put in the liner, and then place the curing material.  Once that’s done, the material needs time to set and then things are up and running again.  That’s the basics of what it takes for pipe lining.
It may not seem like much, but it can and does save people thousands of dollars.  If the company you’re looking at doesn’t have cameras or the ability to do pipe lining, then you need to keep on looking.  It  has made a difference for thousands, and can you as well.  Again, it’s not a matter of if you should have your sewers checked out, you should.  If your new to the home, it’s been more than 10 years, a major disaster has happened, or your home is more than 20 years old.
Remember too, that there are many homes, where the sewer liens were built into the concrete slabs of the floors, if this happens your repair will be huge.  Don’t wait until that happens,  or you will be one that has 1000’s of dollars in repairs, and then you’ll be kicking yourself.
Unless you're really handy...
you can’t begin to do this!