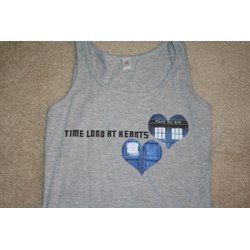 There are several amusing shirts around the Internet inspired by Doctor
Who. If you’re a fan of Doctor Who, then consider buying a shirt to wear
to express your love for this awesome show. These are mostly amusing T-shirts, but some of the places offer shirts in different styles. Here are the best and most
original Doctor Who-inspired T-shirts from many stores around the web.

Introductory picture was taken by me.

I Heart Heart Doctor Who

Time Lords have two hearts, as every Doctor Who fan knows. These shirts express your Time Lordly love for Doctor Who.

The first two shirts are available in small, medium, large, and extra large from Amazon as a standard T-shirt for men and as a juniors fitted T-shirt (for women). They have the new Doctor Who logo (DW in the shape of a TARDIS) and two hearts for proper Time Lordly love. The next shirt is only available as a juniors fitted T-shirt. It has “I heart heart The Doctor” on it. The last one is more subtle. It’s only available as a tank top and says “Time Lord at Hearts,” with two hearts that have pieces of the TARDIS in them.

The Master
â€œI am the Master, and you will obey me.â€

Harold Saxon is the human alias of the Master, another Time Lord. As Harold Saxon the Master runs for British Prime Minister in order to take over Earth. So for the upcoming elections, Vote Saxon. Are the alternatives really that much better?

These are a women’s and a men’s T-shirt. Both are available in many different sizes.

Not a shirt, but for when you can’t wear a T-shirt you can wear these cufflinks to express your love for Doctor Who.

Time Lord Council
â€œFor Gallifrey! For victory! For the end of time itself!â€

High Council of the Time Lords

These T-shirts have the Seal of Rassilon in red surrounded by the words “High Council of the Time Lords, Gallifrey – Kasterborous.” The shirt is ice grey, 100% cotton. The first one is a standard T-shirt available in many sizes, the second one is available in juniors sizes.

Shirts for Fans of Number 11

For fans of Matt Smith as The Doctor, there are shirts that feature the eleventh incarnation of The Doctor. The first shirt has “Mad Man with a Box” written on it, the second shirt says “Trust Me I’m the Doctor,” and the third shirt says “The Doctor will see you now.” They all feature Matt Smith’s face.

Number 10
“People assume that time is a strict progression of cause to effect. But actually, from a non-linear, non-subjective viewpoint, it’s more like a big ball of wibbly wobbly, time-y wimey…stuff.”

Shirts for Fans of Number 10

More Doctor Who Shirts From Amazon

This is hoodie that says Future Companion and has a picture of the TARDIS on it. It’s in navy blue and is available in many different sizes. Stay warm this fall with dreams of being whisked away by The Doctor.

More Doctor Who Shirts Around the Web

Knock Knock! Who’s There? The Doctor T-Shirt
Knock Knock! Who’s There? The Doctor T-Shirt by SnorgTees. Men’s and women’s sizes available.
Doctor Who Polo Shirts
Doctor Who Polo Shirts – Exterminate the dress shirt from your wardrobe. This is a Polo shirt with a small Dalek where the Polo logo would be.
Glow in the Dark Doctor Who Shirt
This shirt has “You don’t know me” written on it with Peter Capaldi on it. Then in glow-in-the-dark print it shows “But you will” with the rest of the Doctors standing behind Capaldi.
“The Angels Have the Delorean” T-Shirt
For fans of both Doctor Who and Back to the Future. This shirt features Weeping Angels in the Delorean.