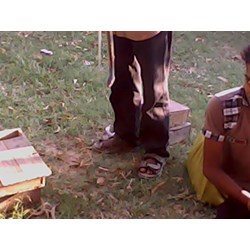 The main and only one demand for this great procession and congregation is the execution of the War-criminals with death sentence. The complexity is when the panel of judges declared their verdicts with so much examinations and time; can they deny their own judgments? Secondly, if this is the case, where the ethical and moral position of the judicial system stands? Thirdly, is it not an unjust for those whose verdicts were executed previously for other crimes, only because no processions from public side took place? What if it becomes a practice for future reference and other verdicts were put under questions?

One day the congregation would be ended. What the next issue before the bloggers? Should not they protest against government atrocities and corruptions? Should not bloggers talk about the government injustice against the opposition parties? Is it fair to consider only the incumbent party supporters as patriots and the rests not? Since bloggers have turned to a political stance, it is now a pressing demands from the swing voters (who are in my opinion majority) that they should raise the other government incompetence and corruptions too, henceforth. Otherwise, it would be deemed and seemingly a puppet act for government, as we all know, beyond Dhaka the movement is controlled, organized and dictated by the government, critics say hijacked by the incumbent party.

Now the new phenomenon of banning opposition parties is under consideration in Bangladesh. What previously were right become wrong. The taste of power and fear of crimes and consequences is well understood by the incumbent. The incumbent’s failure in governing the country made them fearful and suspicious about their next general elections, as the people are not happy at all with their promises and commitments with respect of finance, foreign policy, law and order and inflation. Tip on the ice berg is the recent cancellation of fund by the World Bank with the corruption allegations against the rulling party ministers and officials. The bloggers are saying nothing about it, rather from their stage it was declaring other government issues like banning political parties! Is there any under table activities going on between the government and the protesters? Who knows?

More than seven people were shot and killed by police at Cox’s Bazar, and other places. One blogger was killed by miscreants too. But the government propaganda is against those who killed for protesting, and highlighting the pro-supporter killing. It seems like government is acting like a hostile party towards oppositions, as if they are not citizens of this country! Intolerance and stubborn politics created the country vulnerable and the country might be diving into a bad crisis.

It is said that the current political turmoil is a plot done by government to prolong their tyranny of power. The best issue to befool people is the war crime issue raised at a time, when government has started baffling and caught in a quagmire.

The conspiracy theory is:

If peoples’ attention could be diverted it could save its skins from being questions asked as listed as follows:

All of these questions will be answered negatively. So, using the bloggers name and people are used to implement its bogus and rubbish strategy to reign forever.

Is it the same as Shahbag square?

The government party with its media power has been successfully established among the mind set of people that what is going on at Shahbag, is as same as in and around every cities, and as such it’s a mass supported activities. IS it so? My observation is not. Once again we have proved that we are ‘Hujugay’ (a Bengali word meaning sailing with the wind not understanding).

At Shahbag non-political activists are on the fore front, but backed up by the Government party and its alliances, mostly leftists. Question is where the fund is flowing from? What about the obstruction of roads and undue influence on the justice system, on one issue. What about other vital corruption issues?