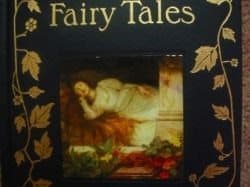 Fairy tales play an important part in everyone’s life. The first book read to a child is likely to be a fairy tale. The first movie seen by a child is likely to be a movie based on a fairy tale. Even if a person has never read a fairy tale they probably know the gist of Cinderella, Snow White, Little Red Riding Hood, and others. Every culture has their own fairy tales or folk tales. They reflect ideals that are important to a society and serve as moral tales that guide everyone’s sense of right and wrong. February 26 is known as Tell a Fairy Tale Day, and this is an excellent time to reflect on the importance of fairy tales and to re-read some of your old favorites or read a fairy tale you have not yet read.

Picture is my copy of Grimm’s Complete Fairy Tales

G.K. Chesterton
“A fairy tale is a tale told in a morbid age to the only remaining sane person, a child.”

Fairy tales are so ingrained in every culture that it may be difficult
to see just how important they are. Fairy tales impart onto children the
importance of being good – no matter how the people around them are
behaving. Much like in real life, being good has no immediate rewards in
fairy tales. But the people who maintain their morals are rewarded in
the end – and the bad people get their comeuppance. More importantly,
fairy tales teach children that pretending to be good gets you nothing,
it’s actually having a good heart that leads to rewards. In fairy tales
the evil characters usually attempt to obtain the rewards upon learning
the method by which good people are rewarded. Their deceit is always
uncovered in the end.

Fairy tales teach us that there is an immense power in being good. In
fairy tales children are faced with evil adults and dangerous
circumstances and they are armed only with their good heart and are able
to overcome the obstacles put in their path. This goes a long way in
giving children confidence that they, too, will be able to overcome
their own obstacles as they are faced with difficulties in their own
lives.

Research the History of Your Favorite Fairy Tales

Fairy tales often transcend cultures and have many different versions.
While a similar story from one culture may not be based on a story from a
different culture, it is still interesting to read about familiar fairy
tales from another culture’s perspective. Below are links to different
versions of the most well-known fairy tales.

Cinderella Across Cultures
The story of Cinderella from multiple cultures.

Snow White Across Cultures
The story of Snow White from multiple cultures.

It’s tempting to think of fairy tales as the domain of the distant past,
consisting exclusively of stories that have been passed down for
generations. But the twentieth century saw many new fairy tales
introduced and take hold, sure to be passed down for generations to
come.

Fairy Tales and Their Hidden Power

Writer Tolovaj
has a blog, Fairy Tales and Their Hidden Power, where he discusses the
meaning and importance of well-known fairy tales. It’s a very
interesting read.

Fairy Tales and their Hidden Power
A blog about the deeper meanings in some well-known fairy tales.