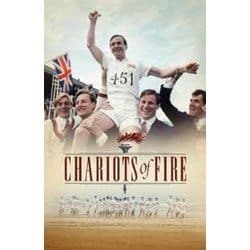 The Chariots of fire is a classic movie of two young athletes that are contrast from one another.  One runs for the glory of God and the other to prove something for himself but the two athletes undauntedly can run the race in the Olympics.

I watched the film when I was young sometime in 1981. One thing which is truly remarkable and notable was the musical background which was played at the beginning when the athletes were running on the shore and the same scene was repeated at the last part.  After knowing the character the running on the latter part became more meaningful.   Listening to the song will surprisingly bring out the fire and the passion within us. To rise above and pursue our goals and stand to what we believe.

“ With hope in our hearts and wings in our heels! ”

The composer of the song was Vangelis who won an award for the musical scoring for Chariots of Fire.   A talent so remarkable and his works are masterpiece which when used as a soundtrack to a film will stand out among others.

I remembered the film when I watched the opening of the 2012 Olympic when Mr. Bean (Rowan Atkinson) played the piano with a single note as the opening of the song while joining the orchestra when they performed the beautiful soundtrack of Chariots of fire. While playing with one note he fell asleep and dream that he was running along the shore with the athletes like the Chariots of Fires.  Would it be a surprise that he won the race? Who would not if he uses the car to out run the other athletes, but I think Eric Liddell and Harold Abraham would not mind at all, funny Mr. Bean.

The Chariots of fire is a beautiful and an inspirational story. One of the greatest film and music I have watched and remembered throughout the years.

Have you watched the Chariots of Fire? You can leave your comment if you enjoyed it like me