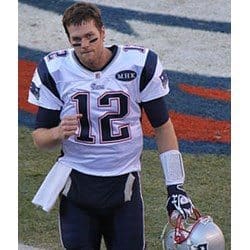 Yes, the autumn has arrived, and for many, that most unexpected injury!  That’s right, most don’t think about it, but when fall comes, so does an increase in injuries.  That may sound strange if you’ve never thought about it, but consider this.  When the summer stops, children and adults go back to school, and often times that includes starting sports after months of goofing off and having fun.  In school it means that you may be starting what’s called Freshmen two-a-days.  This means that you get two weeks of boot camp.
If you’re in the pros, then it’s 5 months of boot camp.  But that’s part of what they’ve signed up for and what they get paid for.  The problem is, if you’ve been inactive for the ‘off season’, then you’re going to have challenges when you get back to the playing field.  Sometimes those challenges result in injuries!   Just ask Tom Brady, who received an injury during training this week!
Oh No For Tom Brady!
Oh no for you and your child as well!

How to avoid injuries!!!

I get that pro sports, and those that do other sports need a break from their normal activity.  Proof of that comes with the fact that injuries spike towards the end of the football season.  It’s a hard hitting game, and there’s no way around that.  Just as injuries spike at the end, so to do they spike at the beginning…just ask Tom Brady.  Having said that, I’d like for you to consider a couple of things for your off season and the beginning of your season that just may help reduce if not completely eliminate your injures.
First of all, cross training.  I’m not saying to play football all year around, but pick up swimming, jogging and weight lifting in your off season.  This way you’re bodies not going to be as shocked when it goes back to the riggers of football, or whatever sport you love to play.  Cross training keeps  your body in motion, while allowing it to recover from the sport that is seasonal for you.
Secondly warm up good, this includes stretching.  Most injuries occur, because people never warm up and stretch.  I had a karate instructor who’s teacher insisted on having them never warm up.  He said, “they can do it on their own!”, the only problem was, people weren’t doing it on there own, and injuries continued to mount, as did the dropout rate.
These two things alone, will lower if not completely stop  your injures.  It’s not hard, but it does take discipline.  Remember to, if you’ve had a sedentary lifestyle, ease into working out.  You’re not going to be running a marathon tomorrow, and you’re probably not going to be in a police academy either.  Do what you need to do, as you need to do it.  I have actually seen, where the most someone could do when they were seriously overweight was to do 5 leg lifts in a chair.  That sent their hearts racing as well as wore out then muscles.
Do what your fitness level is, and don’t worry about what the Tom Brady’s of the world are doing.  Remember, pro athletes are a small portion of our societies, not the major portion. As long as you’re moving forward and doing more tomorrow, than you did today, you’re moving in the right direction.
Warming Up & Stretching
can make a world of difference in your injuries!

If you do get injuried!

If you should get injured anyway, consider that you may not need to spend hours in the emergency room.  If it’s not a break, and your team doesn’t require you to go to the hospital, you’re best option is probably going to be an urgent care.  There are a lot of them, and they have a couple key things that the doctors office doesn’t have.
First in most cases they can see you faster than either your regular doctor or an emergency room doctor.  If you’re like me, time is money and this is huge!  Speaking of money, urgent care doctors run about the same, if not less than your normal doctor.   If those two reasons aren’t enough for you, consider that urgent care doctors are also emergency room doctors, that saw the need for an urgent care situation, that wasn’t an emergency.  If you’re not dying, urgent care is the route to take.
Boca Regional Urgent Care
Is one top notch urgent care, that gets that you want great customer service as well as great medical care!